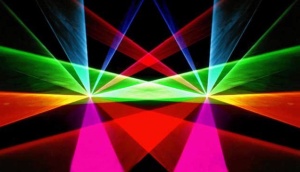 One of the things people think of when a planetarium is mentioned is the classic rock laser light show.  The Pink Floyd laser show has been synonymous with planetariums for a very long time now.  But other laser light music shows have come and gone as well.  But here at LASM we actually program our own laser light content.

Whether we are filling in gaps in a live show; creating a multi-media presentation with full dome visuals, cove lights and lasers; or just entertaining the audience before the show starts, the planetarium at LASM creates new laser content on a regular basis.

For instance, when you come to visit the planetarium you’ll probably be seated for the show about ten minutes before the presentation begins.  While waiting for your show you’ll probably see some neat laser lights on the dome that goes with the house music.

It’s also in Showtime 2000 that I put effects on the lasers, i.e. fuzz effects, splitters, mirrors, etc.  With this I can draw a pyramid and split that one pyramid up into red, blue, and green clones of the original then spin them around the dome with other effects.  Using effects like X-Y-Z Rotation and Port Controls I can create a whole scene that can last minutes with just one frame of animation.

I can also arrange many frames of animation to create a cartoon like experience.

With the “Live” portion of Showtime 2000 I can create segments of animation that can easily be cued up with a single mouse click or the press of a Function keys on the keyboard.   The Live portion of Showtime will also let me manipulate single frames into scenes that can be synched up to music.

I’m currently on tour in Mexico with a company called Cirque Dreams.  I was pleasantly surprised to see that when I began the tour they were also using the same laser program that I use at LASM.  The “Rocks” tour uses more lasers, beams, and effects than we use at the planetarium but it was interesting to see that it’s all run by the same software and the same Live configuration that I use at the Irene W. Pennington Planetarium.