Yes, I’m still in Cancun, Mexico on my little rock and roll tour.  The days are filled with practice time and the evenings are filled with doing two shows a night.  This leaves me with some quality late night time to get out on the beach and look up at the constellations of the Cancun sky.
|

When I’m back home I’m always looking up at what’s called a “city sky.”  This means the light pollution from car lights, street lights, and businesses block out a lot of the fainter stars.  If you really want a chance to see the Milky Way then you’ve got to get far away from the city and look out to a “country sky.”

Cancun, Mexico is home to some mega resorts – 3000+ room resorts that are pretty much running all day and all night.  And even though I’ve been calling the Moon Palace “home” for the past month I can still get out and get away from the city lights and see some stars not normally visible in a city setting.  Also, I’m about ten degrees further south from my home city of Baton Rouge.  So not only can I get away from a lot of the city lights but I can also check out some constellations not visible in my home town because they’re below my city’s horizon.

Because of this I was reminded of a story about Arthur Eddington.  Eddington helped organized two expeditions from Europe to an island by Africa called Principe to test Einstein’s theory of relativity.  He wanted to test the theory that during an eclipse light from a star passing near the Sun would be shifted since they’re path was affected by the Sun’s gravitational pull.  This theory could only be tested during an eclipse since normally the Sun’s brightness would outshine the other stars.  He later published his findings that confirmed Einstein’s theory of relativity.

What’s this have to do with the sky I see in Mexico?

Well, we often forget that we live on a big globe and being on this big globe we can travel to all different locations and see a completely different sky.  Much like if you had a globe in your living room and you put a little car on it.  That little car can travel around the globe and one second the ceiling fan is in its view and then all the way on the other side the carpet is now in its “sky.”  Yes, depending on where you’re at and the hemisphere you’re in determines what type of constellations you can see.

Eddington had to travel to a very different part of Earth that day of May 29th in 1919 to align his view of the sky so that the Sun, Earth, and Moon lined up just right for his test.  And now that I’m in Cancun, Mexico I can see constellations and stars in my sky that would normally be to far below the horizon to be seen in Baton Rouge.

Here in Cancun I can use my Bing SkyMap app on my phone to locate constellations like Corona Australis, Ara, Corvus, and Lupus.  It’s also possible to see M6 (The Butterfly Cluster) and M7 (Ptolemy’s Cluster) with the naked eye.  However, I was not able to get far enough out into a dark enough area to view these clusters.

I still have about two weeks left here in Cancun and I’ve already discussed with some people about being able to get a little further down the coast towards Xcalak to really get away from the city and the lights. 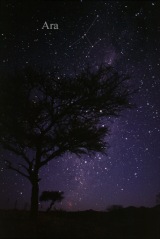 It’s just one more interesting thing you can do if you ever visit Cancun, Mexico.  Sure there’s the beach,  the snorkeling, and (in my case) the Cirque, but remember that if you’re visiting another part of the globe that you should take a few minutes to look up at the sky and see some stars and constellations you won’t normally be able to see.  For example, Gamma Arae is a blue-hued super giant in the constellation of Ara and it’s about 1140 light years from Earth.  That means when you look at Gamma Arae the light that enters your eye took 1140 years just to get to you so you can see it.

And you thought the plane ride was long?