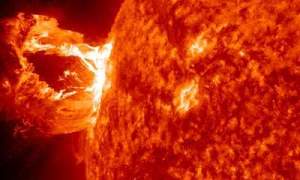 The Sun’s activity has been very strange this past century.  Solar scientists say that the Sun has produced about half as many sun spots as expected and the magnetic poles are out of synch.

About every 11 years the Sun’s magnetic poles weaken, drop to zero, and then re-emerge with an opposite polarity.  This happens when the Sun’s magnetic field  moves north or south from the equator , wearing away the existing pole.

Phil Scherrer from Standord University’s Wilcox Solar Observatory says that the North pole has already changed about a year ago and the South pole is still waiting to catch up.

“The delay between the two reversals is unusually long,” said solar physicist Karel Schrijver at the Lockheed Martin Advanced Technology Center in Palo Alto, Calif.  It looks like a complete field reversal could be “no more than three to four months away.”

This unusual flip could cause geomagnetic storms resulting in radio blackouts and interference with satellites.  This also adds up to a production of more cosmic rays which, in turn, creates a more impressive display of the Northern Lights.