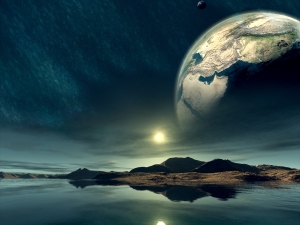 It seems that just about every week or so scientists are discovering something weird out there in space.  Some of these discoveries are more exciting than others, i.e., finally discovering water ice on Mars or discovering a star that’s potentially the size of the orbit of Saturn.  But then sometimes new discoveries come and go and few people pay attention to them.  I would like to talk about one such discovery:  the discovery of possible ocean waves on Saturn’s largest moon, Titan.  Could these possible waves be caused by Titan’s winds or something else that lies beneath?

Alright, look, I don’t want to lead anyone to believe that there might be some creature lurking under an ocean of Titan or anything.  There’s absolutely no proof presented that would suggest such a thing.  It’s fun to think of though, right?
It’s also important to point out that these ocean waves are still being studied.
It’s currently not concrete whether planetary scientists are looking at ripples or some slick of mud.

However, they have ruled out that it’s not some iceberg becoming exposed due to a change of sea level.

Jason Barnes, a planetary scientist at the University of Idaho in Moscow, says that NASA’s Cassini spacecraft spied several unusual reflections of sunlight off the surface of one of Titan’s hydrocarbon seas, Punga Mare, in 2012 and 2013.  Those glints may come from tiny waves that are disturbing the otherwise flat ocean – ripples that are no more than 2 centimeters high.

Because Titan has small lakes and large seas of methane, ethane and other hydrocarbon compounds, it has a complex and strange weather system that rains down the droplets of these chemicals that have evaporated into its atmosphere.  So, yes, it rains on Titan; it even has a wind system.  However, Cassini has never spotted ripples on any of these seas in previous surveys.  The liquid surfaces on Saturn’s largest moon has always been very glassy, i.e., very calm.  This could be because the liquid hydrocarbons are more viscous than water and thus harder to get moving, or because the supposed winds on Titan are simply not strong enough to blow the liquid into ripples.  Yes, it’s kind of similar to Willy Wonka’s chocolate river at his factory:  much thicker than water and harder to maneuver.

Research is still ongoing when it comes to the creation of these waves.  Knowing how these waves forms will help scientists understand the physical conditions of these lakes and seas.  It will also help with future expeditions and the creation of some lake lander that could traverse the liquid surface.  After all, they would need to know if we dropped a probe down there would it plop or would it splash?

A Cassini flyby in August may be able to shed a bit more light on this evolving mystery.