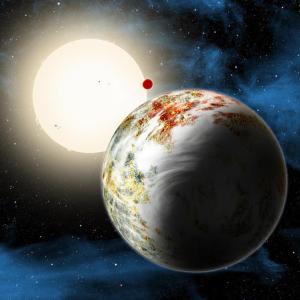 Five Hundred and Sixty light years away, in a constellation called “Draco,” circling an old star named “Kepler-10,” resides a recently discovered planet that is twice the size and 17 times heavier than our own Earth.  This so called “Mega-Earth” was announced on Monday at the American Astronomical Society meeting in Boston.

The discovery of “Mega-Earth” brings a bit of a surprise since planets this size are usually gas giants.  Dimitar Sasselov, director of the Harvard Origins of Life Initiative said that “A mega-Earth is a lot of solids concentrated in the same place without any gas. That is a problem because our understanding for how planets form requires the solids to get together in an environment where almost 99 percent of the mass … is hydrogen and helium.”

However it was formed, this rocky planet has a diameter of 18,000 miles, a distance 2.3 times greater than our own planet.

This is a significant discovery and bodes well in the search for extra-terrestrial life.  “As far as we know – and we know very little about origins of life – we think the emergence of life from geochemistry, occurs on solid planets,” Sasselov said.