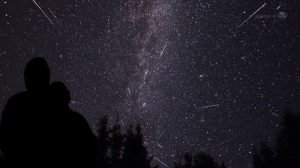 For those people living in the Northern Hemisphere, August is the month to enjoy the Perseid Meteor Shower.  However, this year many skywatchers will be facing a mean adversary in their attempt to see this annual spectacle:  the bright presence of the Moon.  But don’t fret, there’s still some windows of opportunity for you to catch a few shooting stars.

The peak of the Perseid meteor shower will be around Aug. 12-13, but this is also when the moon will be out, flooding the nighttime sky with light.  But you can still see a few shooting stars if you venture out into the pre-dawn hours of the morning.  The Perseids are actually weakly active starting around July 17th, but the upswing really starts during the second week of August.  Even though there will be some light pollution via the Moon, if you look up in the sky while the moon is out you might still be able to see a large Perseid fireball that breaks free of the moon’s bright influence.

Normally, in the absence of moonlight, the average observer would be able to see about 100 meteors an hour.