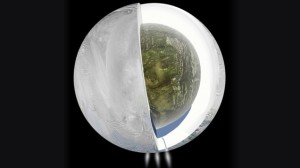 According to NASA, one of Saturn’s moons named Enceladus may harbor a hidden ocean containing alien life.

Along with other moons like Titan and Europa, Enceladus was on a list of possible prospects for scientists to investigate for possible signs of microbial life.  Over the years, however, Enceladus fell off the list while attention was aimed elsewhere.  But all that has changed.

Recent data collected by NASA’s Cassini spacecraft and Deep Space Network has confirmed what scientists theorized as an underground water reservoir.  It’s a theory dating back to 2005, and according to Luciano Iess of Sapienza University of Rome, lead author of the paper, “The Cassini gravity measurements show a negative gravity anomaly at the south pole that however is not as large as expected from the deep depression detected by the onboard camera. Hence the conclusion that there must be a denser material at depth that compensates the missing mass: very likely liquid water, which is seven percent denser than ice. The magnitude of the anomaly gave us the size of the water reservoir.”

Iess explains just how large this body of water is, “The gravity measurements suggest a large, possibly regional, ocean about 6 miles (10 kilometers) deep, beneath an ice shell about 19 to 25 miles (30 to 40 kilometers) thick. The subsurface ocean evidence supports the inclusion of Enceladus among the most likely places in our solar system to host microbial life. Before Cassini reached Saturn in July 2004, no version of that short list included this icy moon, barely 300 miles (500 kilometers) in diameter.”