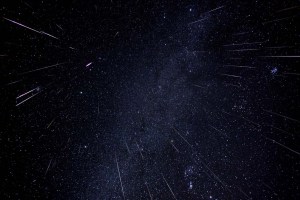 Every December the Geminid meteor shower brings out sky watchers to admire the spectacle which can produce up to 120 sightings per hour.  Named because it appears to originate from the Gemini constellation, the Geminid meteor shower show runs from Dec. 7 through the 17th, peaking between the 13th through the 14th.  Though the moonlight will block out most of the meteor sightings, you can still catch more of the prominent ones that appear to race across the night sky.

Most meteor showers are remnants of comets, but the Geminid meteor shower is different.  The Geminid show is due to an asteroid called 3200 Phaethon which is said to have broken up or collided with something, leaving a dusty trail behind.  This debris intersects with Earth’s orbit every year.

According to Slooh Astronomer, Bill Berman, “the Geminids are very strange because they hit Earth sideways. It is the difference between being in a car and slamming head on into somebody as opposed to someone backing into you sideways, perhaps coming out of a driveway and crunching into you gently. These meteors hit us gently.  While Summer’s Perseids strike Earth at 37 miles per second, that’s amazingly fast, and the Leonids are even a little bit faster, hitting us at just over 40 miles a second, these Geminids hit us at only 22 miles a second.”

The best time to view the Geminid meteor shower is close to midnight, local time.