For the past several days there has been a lot of talk about this mysterious star located some 1,480 light-years away called KIC 8462852, located in the constellation Cygnus .  This star appears to be flickering at irregular intervals.  Some have gone so far as to hypothesize that the dimming is a sign of an advanced alien presence, suggesting the possible presence of advanced satellite orbits or a Dyson sphere.  This has been a hot news story in the reaches of astronomy.  But I waited to post anything about it, choosing not to jump on the train of speculation until further news came in.

In case you haven’t heard yet, word has been swirling in a number of publications, including The Atlantic, The Washington Post, Newscientist, and the sober Monthly Notices of the Royal Astronomical Society, that there is something strange going on around the star known as KIC 8462852.

The Kepler Space Telescope has been aimed at a small patch of the Milky Way that contains about 150,000 stars. This telescope is looking for what is known as occultation—the periodic dimming and brightening of light coming from the stars. If the flickering happens at predictable intervals, the odds are that the star has a planet orbiting around it, blocking out some of the light as it passes by.  The amount of dimming can also give a clue to the orbiting planet’s volume. So far Kepler has discovered more than 4,000 worlds, or candidate worlds, this way.

But KIC 8462852 has an unusual and irregular pattern to how it dims and brightens, almost as if the star is being orbited not by an planet or orderly procession of planets, but by a mass of debris of different sizes, speeds and orbital inclinations.  This has caused some people to suggest that there might be a buzzing bout of manufactured satellites that stream around this star.

Actually, there are a lot of possible explanations for this behavior:
For starters, it might be a cosmic collision between a planet and a passing planetesimal—the kind of chance collision that is believed to have created our own moon.  It could be a colossal set of collisions in an asteroid belt that sent debris spiraling in every manner of direction. It could even be a swarm of comets dragged in by a passing star and then gravitationally grabbed by KIC 8462852. There is also the possibility that KIC 8462852 is simply a young star, which is surrounded by an accretion disk of dust and rubble that has not yet swirled down into planets or been gobbled up by the star itself.

There is another possibility being proposed. 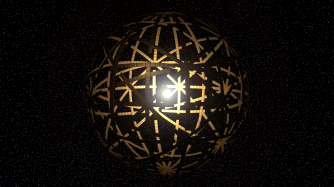 Physicist Freeman Dyson first proposed the idea of something called a Dyson sphere back in 1960 .  He thought that a highly advanced civilization would encounter the same issues we were having, including a shortage of clean, renewable energy. He proposed that a massive orbiting infrastructure of mirrors and solar panels circling the parent star would solve that problem, generating up to 400 septillion watts per second—or one trillion times Earth’s energy usage—to be tapped by the civilization at will.

That being said, a recent paper authored by Tabetha Boyajian, a postdoctoral student at Yale, dismisses all these claims.

The accretion disk theory fails, for example, because a young star typically emits high levels of infrared radiation, and KIC 8462852 is low on the infrared scale. The asteroid belt accident has flaws as well, again because the infrared signature is wrong, and also because the dimming would be steadier and less intermittent than what has been observed. A similar frequency problem exists in the planetesimal theory. The comet swarm idea gets the most traction in Boyajian’s paper, but fails in part because the comets would likely move too close to the star, causing them to break apart from thermal or gravitational stress.  The Dyson sphere wasn’t even addressed.

None of this completely rules out the idea that something odd is actually happening at KIC 8462852—or at least was happening 1,480 years ago, when the light that Kepler detected left the star. Boyajian and her colleagues hope to turn a massive radio antenna in the star’s direction to take a closer look, perhaps as soon as early 2016, and see if that reveals more evidence.

It is highly unlikely that we happened upon evidence of an advanced technology.  The problem is that Kepler has been staring through a keyhole. Those 150,000 stars sound like a lot until you consider that there are an estimated 300 billion stars in the Milky Way—which means Kepler has been looking at just 0.000049% of the sky. This is not quite the statistically significant sample group you need for a conclusive survey.

Even if it doesn’t, however, it hardly suggests that there is no life in the universe. Indeed, depending on how you view things, it’s quite possible there’s plenty of it. Not only are there 300 billion stars in our immediate neighborhood, there are 100 billion or more other galaxies out there, all of which could be home to biology. What’s more, the stuff of life—water, hydrocarbons, amino acids—has been found throughout the universe. The recipe for life may be nothing more than chemistry plus energy plus time.

The KIC 8462852 lovers have things partly right: life is likely out there. But Ockham has it righter: probably not this time.