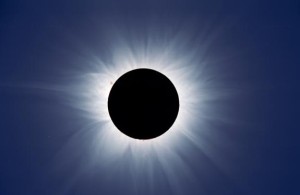 This year, on March 9th, there will be a Total Solar Eclipse, visible over Indonesia and the Pacific Ocean. A total solar eclipse occurs when the moon completely blocks the Sun, revealing the its beautiful outer atmosphere known as the corona. An eclipse thereby totally or partly obscures the image of the Sun for a viewer on Earth. The view you see here will be the view of the sky visible in parts of central Indonesia and the Pacific Ocean.

It will be a total solar eclipse in Indonesia and the central Pacific, starting at sunrise over Sumatra and ending at sunset north of Hawaii. In the Eastern Pacific Ocean the totality will exceed a duration of more than 4 minutes.

A partial solar eclipse will be visible in most parts of northern Australia and southeast Asia.

View the video below to see what the solar eclipse will look like from Earth and from space.