This January 28, the Moon will be located on the same side of the Earth as the Sun and will not be visible in the night sky. This phase occurs at 00:07 UTC.  This is the best time of the month to observe faint objects such as galaxies and star clusters because there is no moonlight to interfere.

END_OF_DOCUMENT_TOKEN_TO_BE_REPLACED

This January 19th, the planet Mercury reaches its greatest western elongation of 24.1 degrees from the Sun. This is the best time to view Mercury since it will be at its highest point above the horizon in the morning sky. Look for the planet low in the eastern sky just before sunrise.

END_OF_DOCUMENT_TOKEN_TO_BE_REPLACED

This January 12th, Tthe planet Venus reaches its greatest eastern elongation of 47.1 degrees from the Sun. This is the best time to view Venus since it will be at its highest point above the horizon in the evening sky.

Look for the bright planet in the western sky after sunset.

END_OF_DOCUMENT_TOKEN_TO_BE_REPLACED 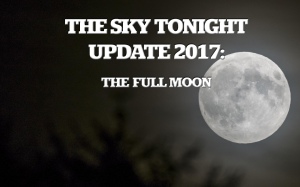 This January 12th, the Moon will be located on the opposite side of the Earth as the Sun and its face will be will be fully illuminated. This phase occurs at 11:34 UTC. This full moon was known by early Native American tribes as the Full Wolf Moon because this was the time of year when hungry wolf packs howled outside their camps. This moon has also been know as the Old Moon and the Moon After Yule.

END_OF_DOCUMENT_TOKEN_TO_BE_REPLACED 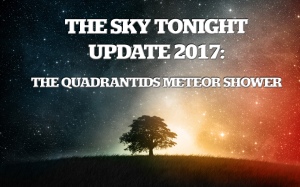 The Quadrantids is an above average meteor shower averaging about 40 meteors per hour at its peak. It is thought to be produced by dust grains and particles left behind by an extinct comet known as 2003 EH1, first discovered in 2003.

The shower runs annually from January 1st through the 5th but it peaks this year on the night of the 3rd and morning of the 4th. Once the first quarter moon sets just after midnight it will leave the skies dark enough for a nice show. The best time and place to view this shower will be from a dark location after midnight. Meteors will radiate from the constellation Bootes, but can appear anywhere in the sky.