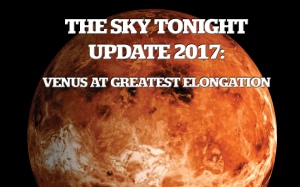 This January 12th, Tthe planet Venus reaches its greatest eastern elongation of 47.1 degrees from the Sun. This is the best time to view Venus since it will be at its highest point above the horizon in the evening sky.

Look for the bright planet in the western sky after sunset.

From Baton Rouge (click to change), it will become visible at around 17:38 (CST) as the dusk sky fades, 38° above your south-western horizon. It will then sink towards the horizon, setting 3 hours and 42 minutes after the Sun at 21:02.

Venus’s orbit lies closer to the Sun than the Earth’s, meaning that it always appears close to the Sun and is very difficult to observe most of the time.

It is observable only for a few weeks each time it reaches greatest separation from the Sun – moments referred to as greatest elongation.

On these occasions, however, Venus is so bright and conspicuous that it becomes the third brightest object in the sky after the Sun and Moon. It is often called the morning or evening star.