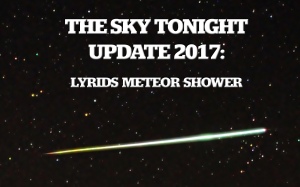 The Lyrids is an average shower, usually producing about 20 meteors per hour at its peak. It is produced by dust particles left behind by comet C/1861 G1 Thatcher, which was discovered in 1861. The shower runs annually from April 16-25; however, it peaks this year on the night of the 22nd and morning of the 23rd. These meteors can sometimes produce bright dust trails that last for several seconds. The crescent moon should not pose too much of a problem for viewing this year and the skies should still be dark enough for a good show. Best viewing will be from a dark location after midnight. Meteors will radiate from the constellation Lyra, but can appear anywhere in the sky.