This May 25, the Moon will located on the same side of the Earth as the Sun and will not be visible in the night sky. This phase occurs at 19:45 UTC. This is the best time of the month to observe faint objects such as galaxies and star clusters because there is no moonlight to interfere.

END_OF_DOCUMENT_TOKEN_TO_BE_REPLACED 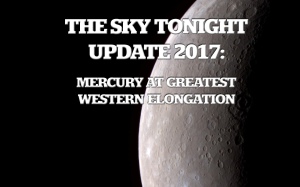 This May 17, the planet Mercury reaches greatest western elongation of 25.8 degrees from the Sun. This is the best time to view Mercury since it will be at its highest point above the horizon in the morning sky. Look for the planet low in the eastern sky just before sunrise. 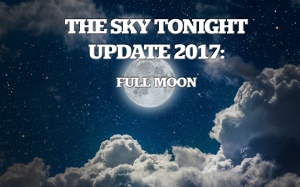 This May 10, the Moon will be located on the opposite side of the Earth as the Sun and its face will be will be fully illuminated. This phase occurs at 21:42 UTC. This full moon was known by early Native American tribes as the Full Flower Moon because this was the time of year when spring flowers appeared in abundance. This moon has also been known as the Full Corn Planting Moon and the Milk Moon.

END_OF_DOCUMENT_TOKEN_TO_BE_REPLACED 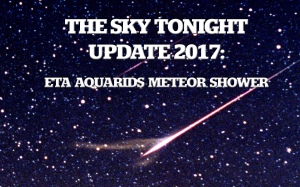 The Eta Aquarids is an above average meteor shower capable of producing up to 60 meteors per hour at its peak. Most of the activity is seen in the Southern Hemisphere. In the Northern Hemisphere, the rate can reach about 30 meteors per hour. It is produced by dust particles left behind by comet Halley, which has known and observed since ancient times. The shower runs annually from April 19 to May 28. It peaks this year on the night of May 6 and the morning of the May 7. The waxing gibbous moon will block out many of the fainter meteors this year but if you are patient, you should be able to catch quite a few of the brighter ones. Best viewing will be from a dark location after midnight. Meteors will radiate from the constellation Aquarius, but can appear anywhere in the sky.