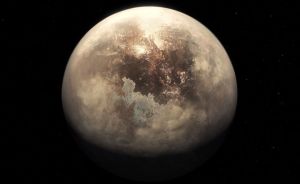 A newly discovered extra-solar planet located some 11 light-years away may be suitable for life.  It’s called “Ross 128 b” and you may be hearing a lot more of this exoplanet in the months and years to come.

First, what is an exoplanet?

An exoplanet is a planet that orbits a star outside of our own solar system.  So far, over 3400 exoplanets have been discovered.  The most recent, Ross 128 b, is very unique and exciting to talk about.  Unlike most exoplanets, Ross 128 b is about the same size as Earth, and it may have a similar surface temperature. This means that this world may contain life.

There are a few details about this planet that make it very different than Earth, however.  First, it takes our own planet 365¼ days to travel around our star the Sun.  Ross 128 b makes its trip around its star in just 9.9 days.  And while our Sun is a yellow star, Ross 128 b’s host star is a red dwarf star: the coolest, faintest, and most common stars found in the universe.

Astronomers found Ross 128 and its planet using the European Southern Observatory’s planet-hunting instrument, called HARPS. The High Accuracy Radial velocity Planet Searcher is based at La Silla Observatory in Chile. The astronomers detail their discovery in a new study, published Wednesday in the journal Astronomy and Astrophysics.

Of course, you may remember several months back of a similar report of Earth-size exoplanets: the TRAPPIST planets and the Proxima b system.  Not only are some of these planets Earth-size but some of them reside in the “habitable zone” of their host star.  The habitable zone, or “goldilocks” zone, is the area just right for sustaining water–if the planet orbits too close to its star, water will boil away; if the planet orbits too far away, water will freeze.

That being said, Ross 128 b is 20 times closer to its star than Earth is to the sun.  However, since the star is so small, dim, and cool, the planet would still be at a potentially comfortable temperature.

The astronomers believe that Ross 128 b is a good candidate for further study when the European Southern Observatory’s Extremely Large Telescope can begin searching the atmospheres of exoplanets for biomarkers in 2025.