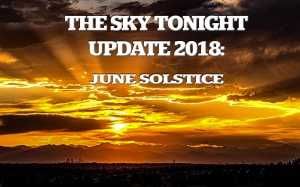 The June solstice occurs at 10:07 UTC. The North Pole of the earth will be tilted toward the Sun, which will have reached its northernmost position in the sky and will be directly over the Tropic of Cancer at 23.44 degrees north latitude. This is the first day of summer (summer solstice) in the Northern Hemisphere and the first day of winter (winter solstice) in the Southern Hemisphere.

A solstice happens when the sun’s zenith is at its furthest point from the equator. On the June solstice, it reaches its northernmost point and the Earth’s North Pole tilts directly towards the sun.

‘Solstice’ (Latin: ‘solstitium’) means ‘sun-stopping’. The point on the horizon where the sun appears to rise and set, stops and reverses direction after this day. On the solstice, the sun does not rise precisely in the east, but rises to the north of east and sets to the north of west, meaning it’s visible in the sky for a longer period of time.