This September 7th, the blue giant planet will be at its closest approach to Earth and its face will be fully illuminated by the Sun. It will be brighter than any other time of the year and will be visible all night long. This is the best time to view and photograph Neptune. Due to its extreme distance from Earth, it will only appear as a tiny blue dot in all but the most powerful telescopes. 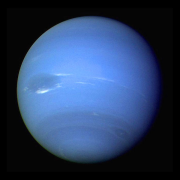 This optimal positioning occurs when Neptune is almost directly opposite the Sun in the sky. Since the Sun reaches its greatest distance below the horizon at midnight, the point opposite to it is highest in the sky at the same time.

At around the same time that Neptune passes opposition, it also makes its closest approach to the Earth – termed its perigee – making it appear at its brightest and largest.

This happens because when Neptune lies opposite the Sun in the sky, the solar system is lined up so that Neptune, the Earth and the Sun form a straight line with the Earth in the middle, on the same side of the Sun as Neptune.

In practice, however, Neptune orbits much further out in the solar system than the Earth – at an average distance from the Sun of 30.27 times that of the Earth, and so its angular size does not vary much as it cycles between opposition and solar conjunction.