The Ursids is a minor meteor shower producing about 5-10 meteors per hour. It is produced by dust grains left behind by comet Tuttle, which was first discovered in 1790. The shower runs annually from December 17-25. It peaks this year on the the night of the 21st and morning of the 22nd. 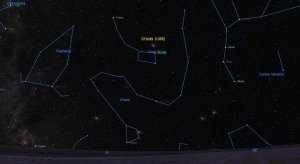 This year the glare from the full moon will hide all but the brightest meteors. If you are extremely patient, you might still be able to catch a few good ones. Best viewing will be just after midnight from a dark location far away from city lights. Meteors will radiate from the constellation Ursa Minor, but can appear anywhere in the sky.

The Ursids are associated with Comet 8P/Tuttle, which was discovered in 1790 and then re-discovered by Horace Tuttle in 1858. It goes around the sun every 14 years and is not a very bright comet, due to its many trips around the sun.

The Ursids occur when Earth passes through the trail of dust and debris left along the comet’s orbit.

The shower itself was first recorded in England in 1900, and also spotted in Germany in the decades following.

Shooting stars are more officially called meteors. Before they hit the Earth’s atmosphere, they are called meteoroids. Meteors that reach the ground are called meteorites, although it’s very uncommon for the debris that makes up meteor showers to make it down without totally burning up in the atmosphere, because these pieces are so small.