If you’re in space and a huge chunk of rock zips right past you, would it make a sound?  No, because there’s nothing in space to carry those sound waves.  However, for years, sound designers have taken many liberties with outer space audio effects.  I have to admit, I take the same liberties from time to time.

As the show is being sliced and encoded I’ve been working on not only the surround sound mix and special audio effects, but also the music while at home.

Creating surround sound audio effects comes after the final mix and rendering of the show audio.  This includes the voice-over track and the music.  On occasion, I’ll track some music in my office.  However, I’ve found that there are far too many distractions while at work, so I save the bulk of musical composition till when I get home and can work in relative silence.

I actually have the same DAW at home as I do at work.  I have the same VST plugins and same sample library on both.  This way, whatever I come up with at home can be transferred to my DAW at work and it’ll all be synced up and in perfect working order.

When composing music at home, I typically use a lot of VST instruments.  These are virtual instruments containing true sampled sounds and manipulated with a keyboard.  So, for all the times you hear flute, violins, percussion, voices, etc. in the show soundtrack, it was all performed and recorded using my Kurzweil K2500S as not only my main keyboard but also my MIDI interface.  I also have a wide variety of guitars, basses, drums, and microphones to round out whatever it is I want to go on during the soundtrack. 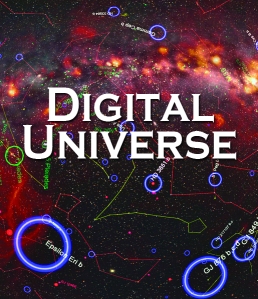 Back in 2008—when I was still the Master Projectionist—I was handling all the audio end of things for the planetarium.  We had a show called Digital Universe and the Director at the time asked me to write all the music for it.  I ended up recording an entire planetarium music album for not only that show but also for any other planetarium that wanted or needed music for their own use.  Each track is able to be crossfaded and blended into each other, regardless of which order you want.  I still can’t believe it’s been over 10 years since I put that CD out and I still find uses for it today.  You can still get a copy of it at CDBaby, I believe.  Actually, I even still have a few copies that survived the 2016 flood that hit my city.

Once the music is all written, recorded, mixed, and mastered as a stereo file, I work on converting all that into a 5.1 surround sound mix.  The process of doing that is a little difficult to explain.  In fact, I’m pretty secretive of how I end up getting a really good surround sound mix for the planetarium.  But, in essence, I export the 5.1 stems into a folder which I bring to work with me and import them into Sony Vegas.

It’s these stems that I align with the rendered .mp4 video of the full show.

I then use the audio track that’s baked into the .mp4 to align with my 5.1 stems to then create surround sound effects.

Vegas has a little video screen up to the right that will let me watch the show while the stems play.  I put down markers for where I want surround sound effects.  Typically, I do whooshing sounds for when we approach a planet, low-end rumbling for when we’re approaching Jupiter, wind sounds if we’re flying through the dust storms of Mars, etc.

Then, once those sounds are in place, I can move the placement of those sounds relative to where the speakers are located in the theater as it corresponds to the action on the screen.  So if an asteroid is rocketing past you from left to right, I’ll manipulate the audio in 3D space so it sounds like the sound effect is following the asteroid’s movement.

The reason why I like to use Sony Vegas for sound effects is because it accepts a wider variety of video files, the automation for the effects is easier to use, and the final output that I can encode to is .ac3, which is in fact a Sony format.   Our system and projectors prefer surround sound audio in the .ac3 format, so that’s what I render down the audio to in the end.

Next, it’s time to wrap up our show.