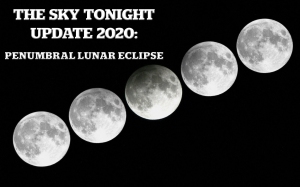 An eclipse of the moon can only happen at full moon, when the sun, Earth and moon line up in space, with Earth in the middle. At such times, Earth’s shadow falls on the moon, creating a lunar eclipse.  Lunar eclipses happen a minimum of two times to a maximum of five times a year. There are three kinds of lunar eclipses: total, partial and penumbral.

A penumbral lunar eclipse occurs when the Moon passes through the Earth’s partial shadow, or penumbra. During this type of eclipse the Moon will darken slightly but not completely. The eclipse will be visible throughout most of Europe, Africa, Asia, the Indian Ocean, and Western Australia.