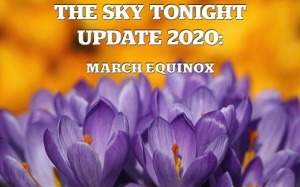 Earth doesn’t orbit upright, but is instead tilted on its axis by 23 1/2 degrees, Earth’s northern and southern hemispheres trade places in receiving the sun’s light and warmth most directly, as Earth orbits the sun. We have an equinox twice a year – spring and fall – when the tilt of the Earth’s axis and Earth’s orbit around the sun combine in such a way that the axis is inclined neither away from nor toward the sun.

At the equinox, Earth’s two hemispheres are receiving the sun’s rays equally. Night and day are often said to be equal in length. In fact, the word equinox comes from the Latin aequus (equal) and nox (night). For our ancestors, whose timekeeping was less precise than ours, they likely did seem equal. But, today we know it’s not exactly so.