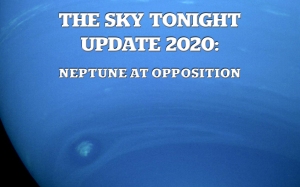 The blue giant planet will be at its closest approach to Earth and its face will be fully illuminated by the Sun. It will be brighter than any other time of the year and will be visible all night long within the constellation of Aquarius.  It will be visible for much of the night, reaching its highest point in the sky around midnight.

This happens because when Neptune lies opposite the Sun in the sky, the solar system is lined up so that Neptune, the Earth and the Sun form a straight line with the Earth in the middle, on the same side of the Sun as Neptune.

This is the best time to view and photograph Neptune. Due to its extreme distance from Earth, it will only appear as a tiny blue dot in all but the most powerful telescopes.