Hello everyone:  people of Baton Rouge and around the world.  This is just an update for what is going to happen periodically through 2016 on this blog.  Here at the Louisiana Art & Science Museum and the Irene W. Pennington Planetarium, we will be producing a series of astronomical updates that will be appearing both on our big planetarium dome and on this blog.  Most of the significant astronomical events will be discussed here in detail and accompanied by an original video production.
These videos will, for the most part, display what you will see in your Baton Rouge sky and where you can find what is being discussed.

Sometimes there will be astronomical events outside the US.  We’ll cover those, too.  For example, the total solar eclipse coming up on March 9th will be discussed this coming Monday.  Look forward to a video detailing what the eclipse will look like from Indonesia and what it will look like from space.

So, for all upcoming blogs labeled “The Sky Tonight Update” you can find not only information on  what is coming up in your sky, but a video production of that very event as well.

Come back soon, we’ll be having many of these updates–as well as other blogs about interesting astronomical events–throughout the coming year.

This week NASA is celebrating a quarter century of discoveries from one of the most revolutionary scientific instruments of all time, the Hubble Space Telescope. Launched into orbit aboard the Space Shuttle Discovery on April 25, 1990, the Hubble changed our understanding of the age of the universe, the evolution of galaxies and the expansion of space itself. Along the way it has had the equivalent of knee and hip replacement surgery: Five times, astronauts on the space shuttle paid a visit to swap out old batteries and install new instruments. Hubble’s fate, however, is uncertain. The Hubble was designed to be serviced by the space shuttle, but the space shuttle fleet was retired in 2011, and the Hubble hasn’t had a repair job since 2009. At some point, under the laws of entropy that dominate the cosmos, the Hubble will begin to deteriorate.

END_OF_DOCUMENT_TOKEN_TO_BE_REPLACED 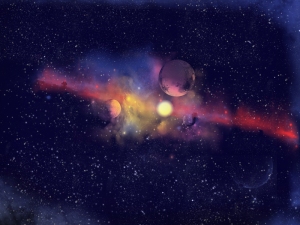 This upcoming April 25th will be Astronomy Day.  It is an annual event in the United States that promotes interaction between the general public and the various astronomy based organizations, enthusiasts, groups, and professionals.  Baton Rouge has several events planned to celebrate this day including the participation of the Louisiana Art & Science Museum and the Highland Road Park Observatory.

END_OF_DOCUMENT_TOKEN_TO_BE_REPLACED

Dr. Carter Emmart, Producer of Dark Universe and director of Astrovisualization at the American Museum of Natural History’s Rose Center for Earth and Space, will present a behind-the-scenes look at how some of the most accurate three-dimensional mapping data of the universe was used to create the show’s beautiful visual effects.

END_OF_DOCUMENT_TOKEN_TO_BE_REPLACED

Tonight, January 13th, at 7pm will be a live presentation in the Irene W. Pennington Planetarium.  Discover both the beauty and science of auroras in a special presentation by the Art & Science Museum’s Irene W. Pennington Planetarium Director Jon Elvert. Learn what auroras are, what causes them, and where they can best be seen. Along with an opportunity to ask questions, information will also be provided on a 2016 Northern Lights Voyage along the coast of Norway. This event is being held free of charge, but please note that space is limited.

This program is held in partnership with Geauxing Places Travel & Hurtigruten.

There has been lots of talk in Baton Rouge about ice, snow, and cold. Let’s change focus and talk about something hot: volcanoes! The planetarium is about to debut its latest show “Super Volcanoes” which gives audiences a front row seat to some of Earth’s largest volcanic eruptions. The show features extensive live action footage of geothermal features in Yellowstone National Park, as well as a complex simulation of an eruption of the Solar System’s largest active volcano, Loki.

Loki can be found on Jupiter’s moon Io. Named for the Norse God of Mischief (or comic book villain if you prefer), this volcano is considered to be the hottest and most powerful in the Solar System. Loki is officially called Loki Patera which means “Loki Basin”. Loki is not a tall volcano, it has no cone. It is the opposite, a large depression in Io’s surface that is filled with lava. Loki alone puts out more heat than all of Earth’s volcanoes combined!

Volcanism was discovered on Io by Voyager back in the 1970s. Up until this point people thought Earth was the only place with such active geology. Initially it was surprising to discover this much activity on such a tiny world. Scientists thought that since larger bodies (such as the other rocky planets, and larger moons) appeared to have thoroughly cooled and stopped exhibiting signs of active volcanism, tiny bodies such as Io wouldn’t exhibit it either. Voyager snapped photos of Io’s surface, showing large volcanic scars as well as plumes of ash reaching into the skies. Io had even more volcanic activity than Earth!

So why is this? As we rub our hands together to stay warm in this winter weather we’re having here in Baton Rouge, consider the moon Io. Io orbits closest to Jupiter out of the four largest moons. The combination of tidal forces from Jupiter, tidal forces from the other large moons, as well as the shape of Io’s orbit all play a role. The constant tugging on Io is thought to cause friction and internal heat inside the moon. Kind of like when you rub your hands together but a lot more so!

Io has mountains and plains, as well as different types of volcanoes. Loki is thought to be a large lake of lava. Images taken from spacecraft show a large dark depression (almost 130 miles across!) with steep edges. Thermal studies have shown that the surface is extremely hot, likely due to a large pool of lava covered by a thin crust. The crusts of these lava lakes can become disrupted, triggering a wave across the lake. The denser crust sinks below the molten rock beneath causing the lake to resurface itself.  Scientists are still unsure about how Loki-type volcanoes form on Io. They could form from a collapsed volcano (this occurs on Earth and they are known as Caldarae), or they could be created from an impact of a large meteor into the surface.

Images of spacecraft have also shown plumes of volcanic material being ejected from Loki that have reached nearly 150 Km above the surface (that’s higher than the International Space Station orbits above Earth!). In “Super Volcanoes” audiences will travel to Loki and witness what this eruption might look like from the surface!

If you haven’t already, check out the trailer for “Super Volcanoes”, opening February 1 at the Irene W. Pennington Planetarium. 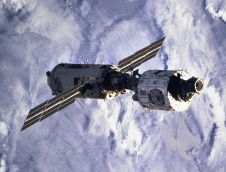 The connected Zarya and Unity modules after Unity was released from the Space Shuttle Endeavor’s cargo bay.

Fifteen years ago on  Nov. 20, 1998, the Roscosmos (the former Russian Space Agency) launched a Proton rocket that sent the Zarya module into space.  This was the first section of the International Space Station.  Two weeks later on Dec. 4, the United States launched the Unity module making the 2 modules a real international space station.

The ISS is now the third brightest object in the sky after the sun and moon.  If you know where and when to look you can easily see it without a telescope, and NASA’s Mission Control at the Johnson Space Center in Houston can tell you when and where.  Log onto Nasa.gov to receive e-mail or text alerts a few hours before the ISS will be passing over your area.  If you sign up soon you might even be able to spot it while “comet hunting” during the Thanksgiving holiday.

Get ready everyone! Comet ISON is approaching the Sun, and is expected to be visible in the pre-dawn sky as early as this weekend. Check back with us for all things Comet ISON: comet updates, photography tips, and more. Don’t forget to come visit LASM to view “Vagabonds of the Solar System: Comets Past and Present” exhibition opens November 19th!

Since its one year anniversary on August 6th., Curiosity has traveled 1,079.52m (3,541′) or about the length of 12 football fields.  That’s an average of 22m per day which is short of NASA’s goal of at least 110m per day.  But during this period, Curiosity did have its longest drive of the mission when on 9/5 it advanced 138.62m. On that day the drive was extended well beyond what the Curiosity team at NASA’s Jet Propulsion Lab in Pasadena could see by enabling the rover’s on-board hazard avoidance system or Autonav.

Next Tuesday is the 1 year anniversary of Curiosity’s landing on Mars. Curiosity will celebrate the day by continuing to drive slowly toward Mt. Sharp. Mt. Sharp is a little over 3 miles high and is in the center of Gale Crater. It began the 5 mile journey to the foot hills of Mt. Sharp on July 7 and should arrive in 9 months to a year. So far Curiosity’s farthest distance traveled in one day was on July 21 when it went 100.3 m.

The distance traveled yesterday was 85.14 m. NASA had hoped it would travel at least 110m per day.  Maybe by next Tuesday Curiosity will break another record but with a top speed over flat hard ground of  just .09 mph that might be asking a little too much.