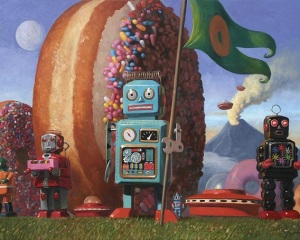 A little while ago I blogged about the mysterious donut-like object that suddenly appeared on the surface of Mars at the base of the Opportunity rover.  NASA concluded that it was only a rock and probably got there by being kicked up from one of Opportunity’s wheels while it moved from point A to point B.  Well, now NASA has a lawsuit brought against them by someone that thinks the object is more than meets the eye and he wants the investigation to go further.