The giant planet will be at its closest approach to Earth and its face will be fully illuminated by the Sun. It will be brighter than any other time of the year and will be visible all night long within the constellation Sagittarius.  It will be visible for much of the night, reaching its highest point in the sky around midnight.

END_OF_DOCUMENT_TOKEN_TO_BE_REPLACED

The Juno spacecraft is a space probe orbiting Jupiter and it’s been sending back some amazing pictures of the gas giant.  Launched on August 5, 2011, Juno only arrived at Jupiter as of 2016 and its been in orbit ever since.  It dives between the planet and its intense belts of charged particle radiation, coming about 3000  miles from the cloud tops at its closest approach.

END_OF_DOCUMENT_TOKEN_TO_BE_REPLACED 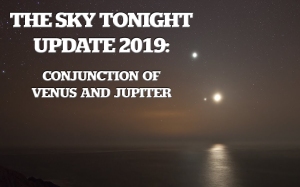 A conjunction of Venus and Jupiter will be visible on January 22.  The two bright planets will be visible within 2.4 degrees of each other in the early morning sky. Look for this impressive sight in the east just before sunrise.

This May 8th, the giant planet will be at its closest approach to Earth and its face will be fully illuminated by the Sun.

END_OF_DOCUMENT_TOKEN_TO_BE_REPLACED 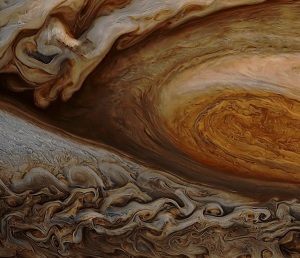 Jupiter’s Great Red Spot is a swirling anticyclonic storm that was previously large enough to fit three Earths inside.  However, observations taken by the NASA/ESA Hubble Space Telescope has revealed that this is changing, both in shape and size.

So why is Jupiter’s trademark feature beginning to downsize?

END_OF_DOCUMENT_TOKEN_TO_BE_REPLACED

Juno is the second spacecraft designed under NASA’s New Frontiers Program and left Earth on August 8, 2011 for a journey to Jupiter.  July 4, 2016 it finally entered Jupiter’s orbit and will now orbit the massive gas giant 37 times in a span of 20 months.  Its mission: to collect data on the planetary core, map the magnetic field, and measure the amount of water and ammonia in the atmosphere.
That’s the gist of the mission, but here are some little known facts you may not already know.

END_OF_DOCUMENT_TOKEN_TO_BE_REPLACED

Tonight marks an interesting alignment of two bright planets in the sky with our moon.  Through the rest of June you can look up and see Jupiter and Venus, along with the moon, in a triangular fashion just after sunset.

END_OF_DOCUMENT_TOKEN_TO_BE_REPLACED 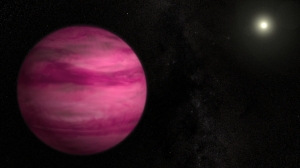 I’m well aware of what today is.  Believe me, I debated on whether or not to make a fake April Fools Day blog posting along the lines of “NASA announces the discovery of intelligent life on planet Eps Eri 04-01a,” or “50,000 year old space ship discovered in Antarctica.”  However, there’s stuff out there in space that’s real and strange enough to bring to light without having to result in phoney gags.  For example, a couple of days back I heard about the discovery of a pink planet way out in space.  So here’s the rundown on the lowest-mass planet ever detected around a star like the sun, GJ 504b that just happens to be pink.

END_OF_DOCUMENT_TOKEN_TO_BE_REPLACED

On March 4, 2014 Charles Bolden, NASA Administrator, released a statement which includes, “In the coming year, we’ll build on our nation’s record of breathtaking and compelling scientific discoveries and achievements in space, with science missions that will reach far into our solar system, reveal unknown aspects of our universe and provide critical knowledge about our home planet.  It includes funding for missions to Mars and the formulation for a mission to Jupiter’s moon, Europa.”

It looks as though we may finally go to a ‘local’ body that will hold many surprises and in astronomical distances Europa is so very close.

Europa is just begging us to visit and the Europa Clipper is one mission.

This artist’s impression of Europa makes the place look more exotic than Mars.

An artist’s conception of the dwarf planet Ceres in the asteroid belt between the orbits of Mars and Jupiter.
Image Credit: ESA/ATG medialab

With the crazy winter weather warnings today in south Louisiana and even school cancellations for tomorrow, I thought it was an interesting time to find out that the dwarf planet Ceres has an icy surface also. With the help of the Herschel space observatory, scientists have detected an icy surface on the only dwarf planet that resides in the asteroid belt. It was previously suspected that ice existed on Ceres but it had not been conclusively detected until now. Plumes of water vapor are thought to shoot up from Ceres when portions of its icy surface warm slightly. This happens in the portion of the dwarf planet’s orbit that takes it closest to the sun. This is a surprise because, while comets are known to have water jets and plumes, objects in the asteroid belt are not. They also believe that if the ice in the interior of Ceres melted, there would be more fresh water than exists on all of Earth!

Ceres is smaller than a planet but, considering it’s the largest object in the asteroid belt, is obviously larger than an asteroid. When first discovered, Ceres was thought to be a comet, then a planet and of course at some point an asteroid. In 2006, The International Astronomical Union reclassified Ceres as a dwarf planet.