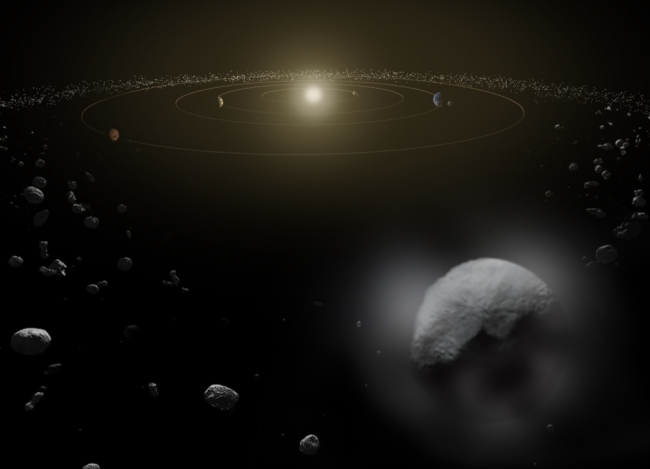 An artist’s conception of the dwarf planet Ceres in the asteroid belt between the orbits of Mars and Jupiter.
Image Credit: ESA/ATG medialab

With the crazy winter weather warnings today in south Louisiana and even school cancellations for tomorrow, I thought it was an interesting time to find out that the dwarf planet Ceres has an icy surface also. With the help of the Herschel space observatory, scientists have detected an icy surface on the only dwarf planet that resides in the asteroid belt. It was previously suspected that ice existed on Ceres but it had not been conclusively detected until now. Plumes of water vapor are thought to shoot up from Ceres when portions of its icy surface warm slightly. This happens in the portion of the dwarf planet’s orbit that takes it closest to the sun. This is a surprise because, while comets are known to have water jets and plumes, objects in the asteroid belt are not. They also believe that if the ice in the interior of Ceres melted, there would be more fresh water than exists on all of Earth!

Ceres is smaller than a planet but, considering it’s the largest object in the asteroid belt, is obviously larger than an asteroid. When first discovered, Ceres was thought to be a comet, then a planet and of course at some point an asteroid. In 2006, The International Astronomical Union reclassified Ceres as a dwarf planet.

An exception from the federal government shutdown has been granted to NASA’s MAVEN mission “in order to protect U.S. property”. The property or properties we are talking about are on the planet Mars; the rovers Curiosity and Opportunity. If MAVEN’s launch window, which is only from November 18th through December 19th or 20th, is missed the next opportunity won’t come along until 2016. This delay would cause major problems since MAVEN’s communication equipment will take over the jobs that Mars Reconnaissance Orbiter and Odyssey have been doing and will allow us to continue to communicate with both rovers. Both MRO and Odyssey have passed their planned lifetimes. Preparation for the launch of NASA’s MAVEN mission has resumed and will continue on an emergency basis.
Besides being equipped to communicate, MAVEN will also probe the Martin upper atmosphere for clues to how the atmosphere has thinned and where its water has gone. MAVEN stands for Mars Atmosphere and Volatile Evolution mission.

Explore Mars in High Definition thanks to Curiosity.