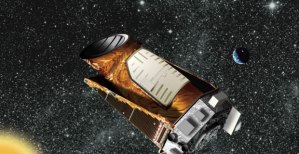 In 2013, the Kepler telescope had to stop planet hunting due to the failure of two reaction wheels.  But that doesn’t mean the telescope is completely out of commission.   In fact, using a new technique that takes advantage of the solar wind, the Kepler telescope just discovered its first planet,  a planet that could be similar to Earth but over twice the size.

This new discovery, named HIP 116454b, is theorized to be a water based planet with a possible rock core.  Its atmosphere is as thick as Neptune’s and has a mass twelve times that of the Earth.  It orbits its dwarf star very quickly, once every 9.1 days, and is about 180 light years away.

Andrew Vanderburg of the Harvard-Smithsonian Center for Astrophysics says, “like a phoenix rising from the ashes, Kepler has been reborn and is continuing to make discoveries. Even better, the planet it found is ripe for follow-up studies.”